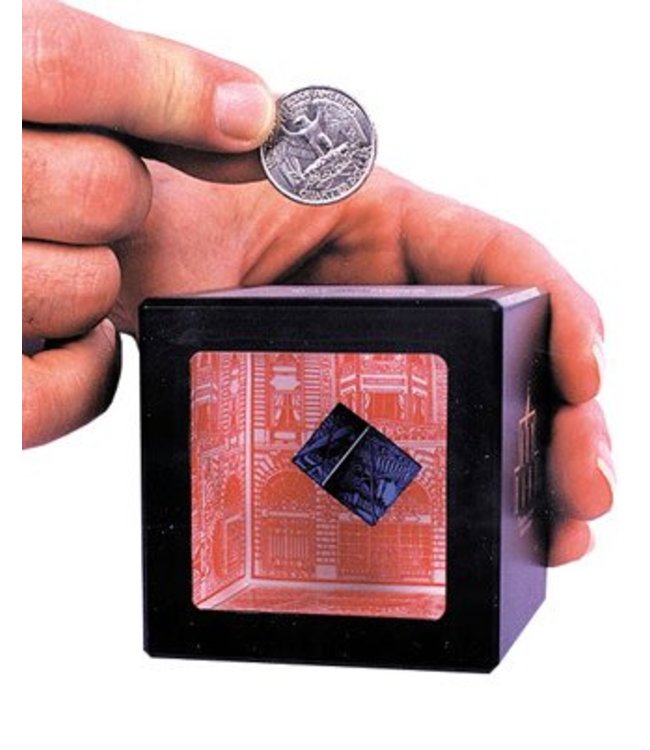 You will have a great time with thie Magic Coin Bank!

A cube mysteriously floats in space in the middle of the box, behind the clear window. Nothing else is seen in the box! Fill it up with as much as 50 quarters as well as many other coins from all different countries. As each coin gets dropped into the slot, they vanish right before your eyes. Bank lid can only be opened by those who know the secret.

The Art Bank is a unique piggy bank. A clever illusion that makes it seem as though the money you put in has vanished before your very eyes, the only thing visible being the colorful 3D cube floating within the cube. Shaking it, you can hear coins rattling around but they are not to be seen. The hidden latch keeps the coins locked in! Tenyo's Art Bank developed in 1989 by by Shigueru Sugawara. Was not part of the normal magic line but it grew into a bestseller with with sales of 4 million units. This novelty item incorporates concepts from magic tricks. It was the first of many unique Tenyo Banks.

If you are a Tenyo collector, and missed your chance on this "non magic" magic item. We still have a few!

(colors of cube and interior backround may vary from picture)