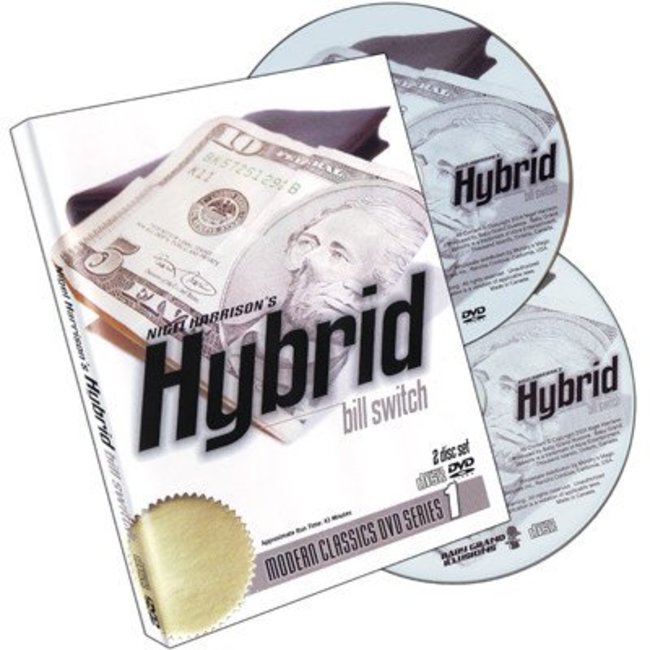 Borrowing two different bills from a spectator, you fold each bill into eighths. Then, simply by touching the two bills together, they visually fuse into one bill. That's right, the two halves of the bill are made up from the two bills you just borrowed from the spectator. This hybrid bill is handed to the spectator for complete examination. You then proceed to rip the bill in half, ending up with one of the original bills in each hand. These are immediately given back to their owner.

This isn't just another bill switch:
In fact, you can't really call it a bill switch at all. Hybrid feels just like a switch but from the audience's perspective, you're not transforming one bill into another... you're visually melding two of their bills into one unit, simply by touching them together. That's pretty amazing stuff.

Disc 1, of this two disc set teaches all the mechanics of the Hybrid switch technique step-by-step, in great detail, so you will be performing the effect within minutes of viewing the DVD. Disc 2 is a CD-ROM that contains several gaff templates, in multiple currencies, that you can print right from your home computer.

As an added bonus:

Nigel will perform and explain Fraction. A borrowed $10 bill (e.g.) is instantly and visually torn in half, into two separate $5 bills. Once examined by the spectator, the fives are fused together, visibly morphing back into the borrowed $10 bill.