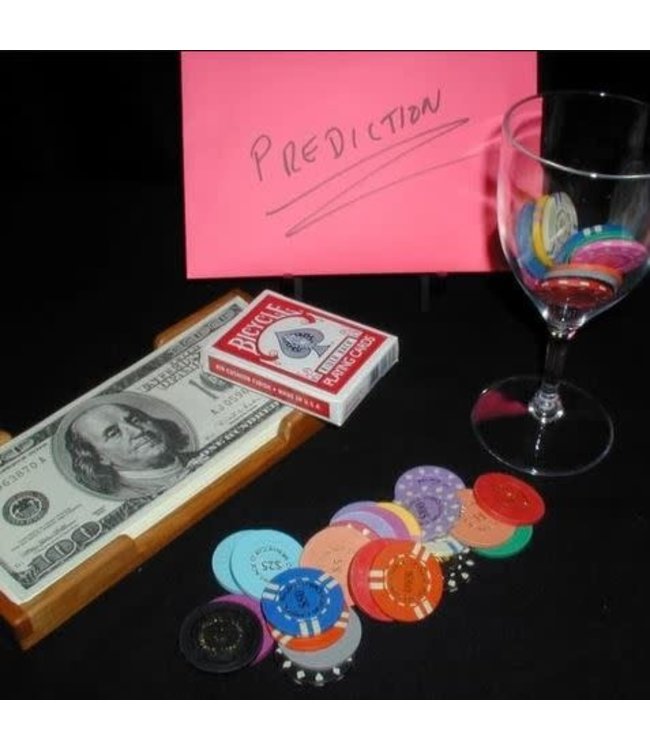 A spectator is invited to take an imaginary trip to a glittering gambling casino somewhere in the world, such as Las Vegas, Reno, Atlantic City, or Monte Carlo.

A large goblet filled with colorful casino chips representing over thirty-five world famous casinos is introduced. The performer displays the chips, removing and reading aloud the names of some of the Casinos, such as Caesar's Palace and The Taj Mahal. The performer has the spectator shake the goblet, randomly mixing all the chips. He is asked to select any one of the chips and to place it in his right hand jacket pocket without looking at it.

The performer now displays a packet of fifty pseudo, jumbo $100 bills (these are really realistic). Handing the spectator a manila envelope, the performer instructs the spectator to cut off an unknown batch of $100 bills. These will represent the amount of money he is going to wager. The selection is made behind the performer's back, sealed in the envelope without either knowing the amount. The balance of the bills are placed aside.

The performer now explains that the spectator has just visited a world famous gambling casino freely chosen from a choice of over thirty five.

He has dealt himself a Blackjack hand, selecting the cards in the fairest possible way, including choosing one of the cards while dealing the cards face-up.

And finally, he has wagered an unknown amount of money by randomly sealing a quantity of jumbo $100 bills in an envelope.

The performer next points to a sealed envelope fastened to the wall. Any spectator is asked to remove the envelope and extract a folded sheet of paper which the performer unfolds and reads aloud.

2. Reading aloud the second part of the prediction, which states that the spectator will deal himself a winning hand of Blackjack with a total of 20. The spectator checks the accuracy of the printed prediction and after removing the two cards from his pocket, announces that his hand does in fact total 20!

3. The performer reads the next and final part of the printed prediction which states that the spectator will wager, for example, $2,200 on a hand of Blackjack. The spectator is asked to open and remove the unknown quantity of bills he earlier sealed in the envelope and count them aloud onto the performer's outstretched palm. The spectator counts a total of 22 bills, a total of $2,200!

Please read the description again. It's all true!

If this prediction doesn't drive them nuts, nothing will (but please don't use this to start a new religion). This is reputation-building material!