Home / Blog / Santa Claus has a long long history, so please don’t try to rewrite it!

A brief history of Santa Claus. How he came to be and where he is going?

Santa Claus has a long long history, so please don’t try to rewrite it!

This is a brief history of Santa Claus. From the earliest origins of the legend of that begin with Saint Nicholas, to the Santa that we now know today and the people who rather than making additions to the legend are trying to change the story that generations have grown up with.

St Nicholas was born sometime around 280 A.D. in Turkey and became a monk. He later became the patron Saint of Children. He was known for his kindness and helping the sick and the poor. For centuries St. Nicholas’ popularity continued to spread. By the 15th century, he was the most popular Saint in Europe. In Holland the Dutch celebrated the anniversary of his death on Dec 6th with a feast day. They called him Sint Nikolaas which became Sinter Klaas for short

After the English Civil War during the mid17th Century, the name Father Christmas first appeared in England. He reminded the  t of the good old days. And they would celebrate with a feast and good cheer.

In 1773 the story of Sinter Klaas made its way into American popular culture, when a New York newspaper reported that many Dutch families gathered to celebrate his feast day.

In 1804, wooden engravings of St. Nicholas were given out at the New York Historical Society’s annual meeting by member, John Pintard. The art showed him as we are accustomed to seeing him today.

In 1809 book The History of New York, author Washington Irving referred to Sinter Klaas as the patron saint of New York. in his. His popularity grew and his named evolved from the Dutch nickname to Santa Claus.

In 1823 A Visit From St. Nicholas, better known as The Night Before Christmas was written by Clement Clark Moore. It is from this poem, Santa’s original eight reindeer first appeared.

In 1841 a life-sized model of Santa Claus was put on display in a shop in Philadelphia. Thousands of children came to view it.

In 18th Century Switzerland and Germany, the story of St. Nicholas was a bit different. There it was believed that Christkind, the Christ Child also known as Kris Kringle would often accompany Saint Nicholas to deliver presents to the good boys and girls.

In 1845 The name Kris Kringle was adopted in many parts of the United States. The Pennsylvania Dutch called him Krishkinkle. Kringle and Santa being one in the same.

In the 1850s in England Father Christmas became synonymous with America’s Santa Claus.

In 1881 Thomas Nast’s artwork of Santa first appeared in an issue of Harper’s Weekly. Nast gave Santa his iconic the red suit with white trim. He also introduced Mrs. Claus, Santa’s Workshop and his Elves. 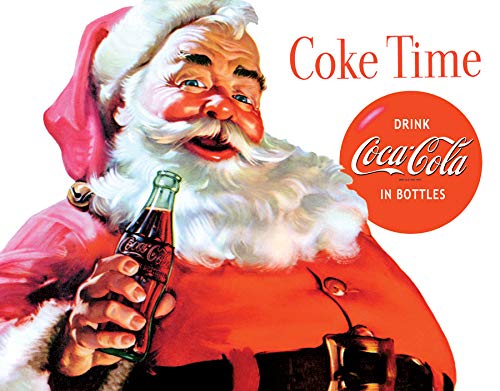 It wasn’t long before The Coca Cola Company commissioned Nast’s artwork for their advertising. Nast’s works are still used by Coke today!

In1890 The Salvation Army began sending out the unemployed dressed as Santa Claus for collect donations to feed the poor on Christmas in the streets of New York. They continue this tradition to this day all around the world.

In Sweden during the first half of the 20th century, artist Jenny Nyström created the image of Jultomten aka Tomten first was by. His image was of a jolly elf, dressed in red with a long white beard. Sort of a cross between St. Nicholas and a Gnome. On Christmas Eve Tomten would ride in a sleigh and deliver presents to all the good children.

In 1924 Santa makes his debut in the Macy’s Thanksgiving Day Parade in New York. He continues to do so every year.

That same year, Macy’s was the first department store where children could sit on Santa’s lap, take a picture with him and they him what they wanted for Christmas.

In 1939 Robert L. May wrote the famous story entitled Rudolph The Red Nosed Reindeer. The book was giving away to children during the Christmas season to help promote business at Montgomery Ward chain stores. The store gave away 2 ½ million copies of book.

The Santa Claus as we know him has appeared not only as a living character but in movies, television specials, animated features for a very long time and in recent years there here have been talks and attempts of changing the mythos of Santa.

The first attempt that we know of was a 2009 article published in the British Medical Journal. The article was critical of Santa’s weight and mentioned that “His behavior and public image are at odds with contemporary accepted public health messages.”

Then the Surgeon General said Santa needed to lay off the milk and cookies and start eating broccoli and carrots.

These articles caused news outlets to take on the story to tell Santa to go on a diet. No more binging on late night snacks and no more milk & cookies. The news instructed parents to have their children to leave Santa water and a piece of fruit.

While we all know being obese is not healthy. But we also know that people come in all shapes and sizes. Sometimes this is due to genetics. Is it anybody’s business besides Santa himself except for maybe Santa’s closest friends and relatives and perhaps his doctor? I say “Leave Santa alone!”

Santa and even Christmas itself is becoming more and more politically incorrect. The act of having Santa at your Holiday party or saying Merry Christmas could be deemed as offensive. Whereas the exact opposite, saying Happy Holidays could also be considered as offensive because Christmas is a federal holiday in the United States and you not only offend Christians, you also offend the US Government. Stores and other corporations are getting flak from the church when they don’t say Merry Christmas and when they do say it, they get flack from people who think you are trying to force religion upon them. Please take a look at Ben Shapiro’s stance on wishing someone a Merry Christmas. CLICK HERE.

In Australia they want Santa to say “HA HA HA” because feminists think HO HO HO is degrading towards women.

In the U.K. Santa isn’t allowed to have children on his lap anymore. Come on now. Really?! Is there any harm of having a child sit on Santa’s lap for a few seconds, take a picture and whisper in his ear what they want for Christmas? Not to mention that a line of parents and other children are looking on, waiting to be next!

In 2016 The Mall of America hired Larry Jefferson-Gamble as their first African American Santa. That same year the Minneapolis Star-Tribune had to shut down its comment section because of a flood of racist remarks it received on the story. Larry Jefferson-Gamble is a great character actor whose persona while perfect for the role of Santa, I feel his look is not. Please do not take this as a racist comment. I say this because the children are accustomed to how Santa looks due to previous meetings and the media. will become confused. Simply put there has got to be some ground rules. Especially for the children’s well being.

When auditioning for a movie, Hollywood has a certain look in mind for certain roles. In other words, they wouldn’t hire Elizabeth Moss to portray The Invisible Man. For at least one reason. She isn’t a man.

If you love Larry Jefferson Gamble’s appeal the same way I do. Why not create a brand-new character? As has been done many times before! Give him an origin story. Define his purpose at and away from the North Pole. Make him Santa’s Number One helper or VP of operations. Anything but Santa.

In December of 2017 The Huffington Post put up an article about the classic 1964 Just A Reminder: Everyone In Rudolph The Red-Nose Reindeer Was The Worst. Calling it problematic racist and encourages bullying.

It’s a cute children’s story that has a message. The story of Rudolph has been around for 80 years and this program for over 50! Let me remind you that in the end, Rudolf saves the day and all disputes are resolved. The “snowflakes” of today really need to lighten up! Rather than have you see the original Huffington Post video, Click Here to see this ludicrous story as told by the Huffington Post but dissected by Ben Shapiro.

In 2018 a female was to appear in Newton Aycliffe England Christmas parade. City councilor Arun Chandran was opposed the idea stating “My understanding is that Santa Claus, otherwise called Father Christmas, is a male role. I have no issue with a Mrs Claus. But Santa Claus being a man is a long-held tradition accepted by the vast majority of society. This has nothing to do with equality. There is no legality issue on this." Read more: https://metro.co.uk/2018/11/27/councillor-tries-to-ban-women-from-playing-father-christmas-8184261/?ito=cbshare

I whole heartedly agree with Chandran. I’m not trying to be sexist here. Once again if you want to add to the story feel free.. make a female assistant. Please won’t you just leave Sana alone.

The only debate on his appearance should be how curly his beard is or which shade of red he will wear for the day, And those questions, you can answer for yourself, by perusing our large selection of Santa Suits, Beard/Wig Sets and accessories at www.ronjo.com. We currently stock 16 different model Santa Beard and wig sets. Some of these are bright white, some more of a natural white, others a silvery white. They come in different lengths, qualities and styles. We even have cheapo fiber beards. As far as suits goes, we carry everything from cheap flannel, to velvet and luxury plush ones. 22 models in all.

So if you need to dress us as Santa for your local pub crawl a majors cities’ Santa Con, your family, church, fire department or department store, Ronjo has you covered for every style and budget.

Santa IS a jolly, old, fat, white, man. May we please leave him that way? Don’t ruin my childhood! And more importantly don’t do it because many young children will become confused and then they will have to be told the truth and the magic of Santa will be lost for at least one generation of kids.

If you want to add to Santa’s story, please feel free to do so. Write a new chapter in the Claus’ life. Perhaps that Santa & Mrs. Claus adopt a gender fluid child who will learn the family business and help Santa make the rounds with the intention of eventually taking over when Santa decides to retire. Maybe the public will embrace the story like they did with the addition of Rudolf. But do not change something that exists in the minds of all who celebrate Christmas. If you must change it, please do it in the confines of your own home and do not try to change anyone else’s’ view of the legend of Santa Claus.

All images are for "Fair Use"